bp9 shows off his latest attempt at integrating Model 100 with MVT100 and 7-inch VGA screen and concludes it's not as portable as he had hoped, once you add all the wires in. Peter got his ham radio antenna fixed for now. Doug is mostly listening this week. Solbu weighs in on the right-to-repair issue and notes that it is critical that folks who can do it safely be allowed to repair their own devices. Robbie shows up late and shows off his new open-source Lastline backup NAS, along with his 3D printing skills for a 2.5-inch to 3.5-inch drive tray adapter.

bp9
- Shows off the Tandy TRS-80 Model 100, MVT100, 7-inch display all mocked up on a perspex sheet to see how it will fit together.
- The use cases for this include transcribing old documentation, writing letters, notes, books, etc.
- With no wires in place it looks all pretty. But when you start connecting all the cables, wires, etc. it gets very unwieldy very quickly. It is not a good portable solution.
- The perspex sheet started out as a platform in your vehicle so you could run a laptop for various ham radio operations (APRS - Automated Packet Reporting system).
- Concludes that the Model 100 and the conventional laptop that evolved from it are the best ergonomic design available for portable operation right now.

Peter
- Got his antenna up with the help of some friends but messed up the lawn due to copper leeching.
- Got his antenna fixed, so he's back on the air Yay!
- Weighs in on the right-to-repair debate but notes that fixing the more modern ham radio sets are darn near impossible dur to high-density surface mounted parts on boards.
- He used to use special screws on repairs so they would know if anyone else tried to repair devices that thay have previously repaired.

Doug
- Is mostly listening this week :-)

Solbu
- His camera in zoom likes to show him as a retro black and write image until he turns it off and back on again (Windows anyone?)
- Is doing the night shift on Voyagers bridge again.
- Used a sheet similar to the platform that bp9 showed as a podium along with a microphone on a gooseneck for presentations.
- Explains how right-to-repair is so critically important to allow folks with the technical knowledge to repair their own devices without that device disabling itself as a result (We're looking at you, Apple!)
- Mentions that manufacturers used to provide schematics inside the cabinets of old, old TVs, stereos, etc. to help folks to fix their own devices if they had the knowledge to do so safely.

Robbie
- Is showing off his new open-source NAS that he just built.
- Has to use a 2.5-inch to 3.5-inch adapter for his solid-state drives, so he is 3D printing them with his Ender-3 V2 3D printer. :-)
- Drive the 3D printer with an SD card because it has its own computer. Separate SBC (Single Board Computer) is not required.
- Building Lastline Backup, designed to work as a redundant backup solution.
- Multiple levels, so that once a backup is written, it is made read-only so it cannot be corrupted once the backup is finalized. 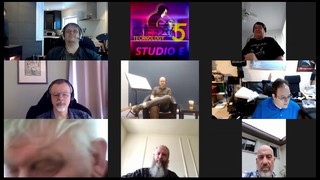 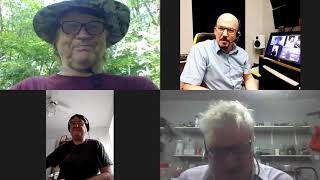 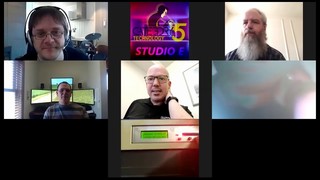 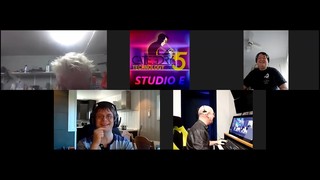